skip to main | skip to sidebar

No power meter? Just use your home trainer!

While we wait for better and cheaper power meters to come on the market, what options do we have?  Ed has kindly demonstrated that the Sporttracks Power Analysis plug-in may actually be pretty accurate. Plus or minus 3%, wow!

Another way of quantifying power output and "getting a feel" for the numbers is to use a fluid trainer. 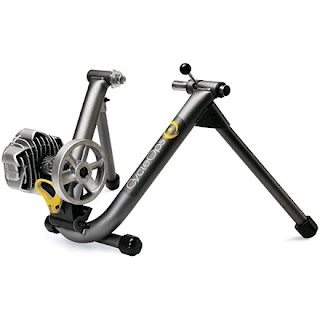 The resistance in a fluid trainer is a function simply of speed; the faster you go, the more the resistance you get.  Magnetic trainers on the other hand use a variable resistance to provide adjustable resistance.  An advantage of this is that resistance can be programmed, so that you can simulate the ups and downs of your favourite ride, with video cues as well, turning it into a virtual reality trainer, such as those made by Tacx and Computrainer.

The main disadvantage with magnetic trainers is that they don't really feel like riding on the road, which is why I like my CycleOps Fluid2 fluid trainer.  Turning the drum on this trainer with your rear wheel forces an impeller to turn in a sealed drum full of silicone liquid.  This, coupled with a flywheel, somehow manages to give somewhat of an acceleration and inertial feel of the open road.

It turns out that fluid trainers have a fixed relationship between power and speed. Some manufacturers actually publish a curve, like this one for the Fluid2: 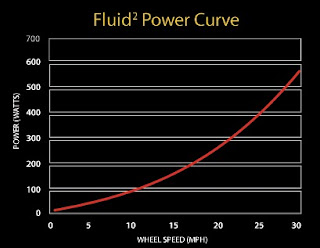 One company, Kurt Kinetic, actually makes a "Power Computer" which, if it actually measured power, would be by far the cheapest on the market, at USD $79.99.  Unfortunately, all it does is convert the speed signal to a power number based on the characteristic curve for their trainer unit.   Kurt Kinetic has even gone trough the trouble of determining characteristic curve equations for competing trainers, so you can use their computer with those.  Unfortunately, the equation they provide for the Fluid2 looks nothing like the curve above, leading me to believe that they must have used a much older unit.

Unfortunately, the nice folks at Saris, the maker of the Fluid2, haven't published a table or an equation that would allow me to easily determine my power given my speed on the trainer.  Perhaps this is because they would rather you buy their $2000 Powertap powermeter? Anyhow, I picked a few numbers off the graph above and put the numbers in an Excel Spreadsheet to find that the curve is very nicely modeled by a third-order polynomial equation.  This one:

Adding a column for speed in KPH yields the following:

And now I can "train with power" on my home trainer, without a power meter, as long as I move my speed sensor to my rear wheel.
Posted by The Bike Geek at 12:18 PM

Thanks for your comment! It will be posted ASAP after it is reviewed.

The Bike Geek
The official blog of the Bike Energy Lab, professional bike fit for road and tri.